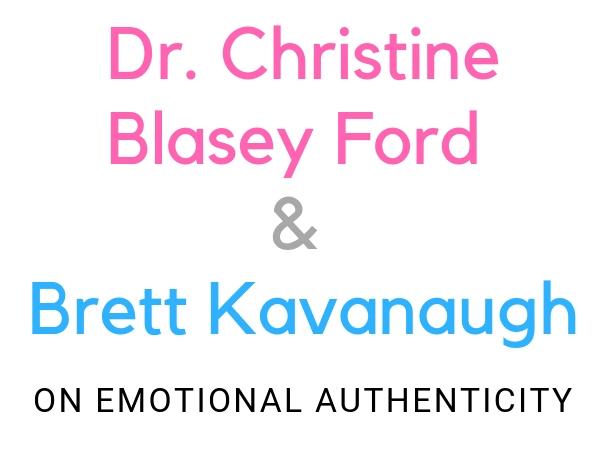 I didn’t have time to sit and watch the whole hearing, however, I’m naturally inquisitive. I spoke to many people and asked their opinions.

What’s beautifully interesting is that every single person had a different slant on the situation. All of them emotional. I was surprised by some of the responses but the most common response always included one of them being right and the other being wrong.

Some said they could see the sincerity in Dr. Christine Blasey Ford while others were not impressed with how little she could remember.

Others said they could see Brett Kavanaugh was totally unauthentic while others believed he was telling the truth.

What if we could give up the idea that one person has to be telling the truth. Is it possible to look a little deeper? Both Dr. Christine Ford and Brett Kavanaugh are on the chopping block. Why did this happen?

What is it in our human evolution that is requiring two people of the opposite sex to come out and tell the truth? And in such a demeaning way. Two people who are highly respected in their careers. People who have gained a tremendous amount of social status in their given field.

Now they stand before the world and share their shame. Wow…. not a pretty site. AND an opportunity for everyone to develop more compassion. More compassion for the plight and differences of the sexes.

Dr. Christine Ford and Brett Kavanaugh
have given us an opportunity

This is an opportunity to bring greater awareness to the human behavior (especially between the sexes) that no longer serves us.

Lots of emotions were displayed during the hearing, sadness, anger, and even fear.

It’s easy to see that both Dr. Christine Blasey Ford and Brett Kavanaugh are under a lot of emotional distress. How is it being handled?

Defensiveness is simply emotional armor. It’s a pattern deeply ingrained in our way of being in the world.  For many of us, it’s an automatic response. Defense is an impenetrable wall. What if we could put down our swords and start taking personal responsibility? Each and every one of us. We would need a more emotionally aware world in order to feel safe to do so.

Instead, we have been taught to deny our feelings. To repress our emotions. Dr. Christine Blasey Ford repressed hers over 30 years ago and denied herself the support she greatly needed. It wasn’t her fault. She didn’t have a safe place to express what she was going through.

It was very interesting for me to observe the emotions that Brett Kavanaugh displayed in his opening statement. It was easy to see that his emotions were something to almost gulp down so that he could continue.

Both men and women (both the masculine and feminine), have been taught to believe that our emotions are not welcome.

Not Having a Voice

Since we’re all literally experts at repressing and denying our emotions, it leaves our more tender, vulnerable, and uncomfortable feelings without a voice.

The little boy and little girl inside of Dr. Christine Ford and Brett Kavanaugh need a voice. It doesn’t matter whether you are male or female. Everyone has a right to their feelings. But very few know how to give their uncomfortable feelings an empowering voice.

That’s why we have the energetics of victim and perpetrator. The idea of blame and someone being right and the other wrong. This type of communication is holding us back.

When we learn how to give our uncomfortable feelings a heart-centered voice we’ll liberate ourselves through the cultivation of compassion.

Power Over (Instead of Power With)

What if those around us empowered us? What if we knew how to empower ourselves. Wow!

And yes we have people that cheer us on in our lives however the world we live in is one of Power Over instead of Power With. This is the patriarchal consciousness that we’re liberating ourselves from.  It’s been co-created by all of us no matter what sexual identity we have.

It’s an evolutionary process and Dr. Christine Blasey Ford and Brett Kavanaugh are a piece of this process. I believe no matter what the individual opinions of each of us… this has been an eye-opening experience for all. At least I hope so.

At this very moment, someone is being sexually assaulted.

RAINN (Rape, Abuse & Incest National Network) is the nation’s largest anti-sexual violence organization. According to their statistics, every 98 seconds an American is sexually assaulted. What is the statistic worldwide? What will it take to change this?

Your sexuality creates your reality. And unfortunately, we live in a sexually violent world.

I too had a sexual assault experience when I was younger. It was in my early twenties well over 30 years ago. Does this event with Dr. Christine Blasey Ford and Brett Kavanaugh bring back those memories? You bet it does.

Am I ready to share the details of this event? As I write this article, no I’m not. But I’m willing to say that I too have had a traumatic experience. It was different from her’s but none the less, damaging to my developing sexual confidence as a young woman. I want to honor Dr. Christine Blasey Ford for the courage she has in order to bring light to a social behavior that still exists today.

What this really shows is the desperate need to bring more sexual awareness to our young people. Well… to everybody. When I was a young woman and my sexuality was developing I had NO EDUCATION that taught me about honoring my body and healthy boundaries. Sex was not talked about in my home.

The only sex education I remember receiving was about male and female sexual anatomy and biological functions. I received no education on the emotional component that exists in the realm of sexuality. And that was what I needed most.

So although Dr. Christine Blasey Ford and Brett Kavanaugh gained great status in our society and are (were?) successful individuals in their own right they are still two people who need a voice and need our compassion.

I believe we have to dismantle the old ways the opposite sexes have interacted so that we can create a new way. A  way that is more loving and honoring to each individual and their sexual needs. I’m part of this new creation through the education I offer.

I’m Anna-Thea an author and Certified Divine Feminine Educator helping people become more emotionally aware. I believe those that do will be the leaders and role models of more loving relationships.

Let me ask you. What emotions have come up for you during this event?
I want to encourage you to feel them.